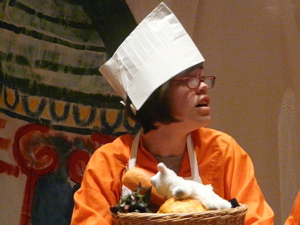 Titus Maccius Plautus (c. 254-184 B.C.) composed over 100 comedies in Latin, adapting them from Greek originals.  The play on which he based his Aulularia (“The Pot of Gold”) has not survived.  Molière’s 17th-century L’Avare (“The Miser”) is the most famous of the later comedies inspired by the Aulularia.

Like all classical drama, the Aulularia is written in verse, and certain sections are meant to be sung by the actors.  We have set five of these lyrical passages to music.  In ancient times accompaniment would have been provided by an aulos, a double-reed instrument similar to an oboe.

Although the characters in the Aulularia speak Latin, nearly everything else about them is Greek:  they have Greek names, Greek clothing, and Greek customs.  The action takes place on a residential street in Athens.

All of Plautus’ actors were men or boys, and they wore masks.  The Aulularia would have been performed without intermission, as we too perform it. 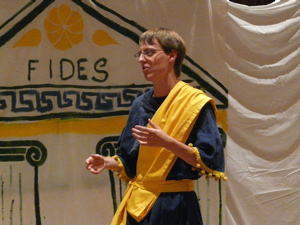 Prologue:  The Lar (guardian god of the household) tells the audience about Euclio, a poor, stingy man who lives alone except for an old housekeeper named Staphyla and Euclio’s daughter Phaedria, nicknamed Aula (“Pot”).  Euclio has no idea that Phaedria is pregnant and about to give birth.  He has just discovered a pot filled with gold and is frantic that someone may steal it from him.  The Lar assures us that the pot of gold will eventually enable Phaedria to marry Lyconides, the young man who loves her and has fathered her baby.

Scenes 1-2:  Euclio drives Staphyla out of the house, suspecting that she is after his pot of gold–when, in fact, no one except Euclio even knows that it exists.  He then leaves for the marketplace, where there is to be a free handout.

Scenes 3-5:  Eunomia has come to visit her bachelor brother Megadorus, Euclio’s rich neighbor.  She advises him to get a wife (Song #1).  Reluctant at first, he soon relents and decides to ask Euclio for his daughter’s hand in marriage, not knowing that she is pregnant.  As Eunomia departs, Euclio shows up and is persuaded to accept Megadorus’ proposal.  Megadorus volunteers to pay for two wedding feasts, one in his house and one in Euclio’s; he takes his slave Strobilus with him to the marketplace to help him hire cooks and buy food.  Euclio, after giving directions to Staphyla, leaves to go shopping himself. 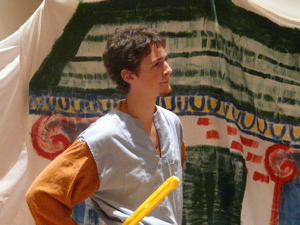 Scenes 6-15:  Strobilus leads back from the market four silly cooks.  After lamenting their bad reputation as crooks (Song #2), the cooks enter Euclio’s and Megadorus’ houses.  Euclio, returning to find his home filled with commotion, chases everyone out, sure that his gold has been stolen.  Finding it still safe, he lets the cooks continue with their work while he carries the pot with him under his cloak.

Scenes 16-18:  Megadorus comes on stage, reflecting on the wisdom of marrying a poor girl with no dowry (Song #3).  Euclio, overhearing the song, is pleased with its sentiments but still suspect Megadorus of wanting to marry his daughter only to get at his gold.  Megadorus leaves to prepare for the wedding as Euclio goes into the shrine of Fides (“Trust” or “Faith”) to hide his pot there.  Lyconides’ slave Pythodicus now appears, having been sent by his master to spy out the situation.  He boasts about his perfect behavior (Song #4). 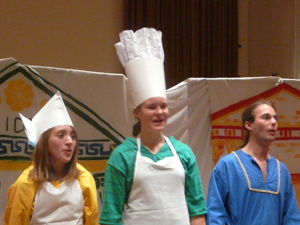 Scenes 19-23:  Euclio, talking to himself about his gold as he leaves the shrine, is overheard by Pythodicus.  As soon as Euclio enters his house, the slave rushes into the shrine to steal the pot.  At that moment the sound of a bleating sheep sends Euclio running back into the shrine to check on the gold.  Finding Pythodicus there, he drives him outand interrogates him, finally letting him go when he sees that the slave is empty-handed.  He decides to hide the pot in a remote grove; as he exits, he is followed secretly by Pythodicus.

Scenes 24-28:  Lyconides and his mother Eunomia arrive at Megadorus’ house.  Eunomia, having learned the truth from her son, goes inside with Lyconides to convince her brother to abandon his wedding plans.  Pythodicus joyfully runs by with the pot he has pilfered; after him comes Euclio, bemoaning the loss of his gold (Song #5).  Lyconides now confesses to Euclio and reports that Phaedria has had a baby.  As Euclio races inside his house to confirm this, Pythodicus returns, having hidden the pot in his master’s house.  He brags to Lyconides about the theft and asks whether he can buy his freedom with the stolen gold; outraged, Lyconides orders him to give the pot back to Euclio.  At this point the text breaks off.  In our production the Lar will deliver an epilogue reconstructing the lost ending of the play, and everyone will, of course, live happily ever after.