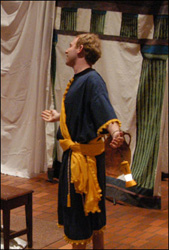 Titus Maccius Plautus (c. 254-184 B.C.) wrote over 100 comedies, of which 20 survive. All are adaptations of earlier Greek comedies.  Thus, even though the characters speak in Latin, they are meant to be Greeks, not Romans, and they wear Greek clothing. Plautus’ source for the Curculio is unknown.

The play takes place in Epidaurus, Greece, at the sanctuary of Aesculapius (or Asklepios, as the Greeks called him), the god of medicine. People suffering from illness used to travel to Epidaurus and spend the night “incubating” in the god’s temple, hoping that Aesculapius or his sacred snakes would appear to them in a dream and cure them.

Curculio is the Latin word for “weevil,” a beetle whose larva eats many times its weight in grain. It is also the name of a major character in the play:  the parasite. Like a weevil, Curculio loves food and is willing to do practically anything to earn a meal.

All Greek and Roman drama is written in verse, some of it designed to be sung. In Plautus’ day, accompaniment would have been provided by an aulos, a double-reed instrument similar to an oboe. We set five sections of the Curculio to music, using rhythms that approximate the various meters in which the play is composed.

While we generally remained faithful to Plautus’ text, we took the liberty of adding a chorus of nurses who work for Cappadox. Their song comes at a point in the play where Plautus has the stage manager appear and chat with the Roman audience. We also quadrupled the number of prophetic chefs and added four singing apprentices, as well as a prologue spoken by Aesculapius.

Plautus’ actors would all have been males and would probably have worn masks. The Curculio would have been performed without intermission, as we too performed it.

Scene 1: During Aesculapius’ prologue Phaedromus walks out of his house, followed by Palinurus, his smart-aleck slave. Palinurus
wonders why his master is awake before dawn. Phaedromus reveals that he is in love with Planesium, a beautiful slave-girl living in the house of Cappadox the slave-dealer. Because he has no money with which to buy her freedom, Phaedromus has sent Curculio to Caria (in Asia Minor) to borrow money from one of Phaedromus’ friends. Although Cappadox will not allow the young man to visit Planesium until he can afford to buy her, Phaedromus can’t wait: he has brought along a drink (wine in Plautus’ version) with which to bribe the old woman, Leaena, who guards Cappadox’s door. 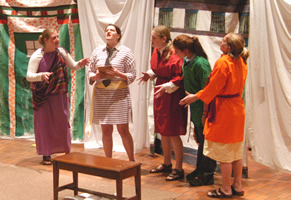 Scenes 2-3: Leaena, trailed by her apprentices, is lured outside by the drink’s aroma and sings about her love for that divine beverage (Song #1). Phaedromus asks her to bring Planesium to him for a quick visit. While she fetches the girl, Phaedromus serenades the door (Song #2). When Planesium emerges, the two lovers have a touching encounter, which Palinurus gruffly breaks up. As Planesium hurries back into Cappadox’s house, four prophetic chefs appear; they are to cook lunch for the parasite, who is due to return from Caria that very day. The young man, his slave, and the chefs all enter Phaedromus’ house.

Scenes 4-6: Cappadox and his four nurses emerge from the temple of Aesculapius, where the slave-dealer has spent the night (Song #3). Out of Phaedromus’ house comes Palinurus, who volunteers to interpret a bad dream that Cappadox has had; the prophetic chefs appear and send Palinurus away. They advise Cappadox to go back into the temple and make peace with the god. Palinurus returns, sees Curculio arriving, and calls Phaedromus outside. The hungry parasite announces that he was not able to get any money but did steal the signet ring of a soldier, Therapontigonus Platagidorus, who was intending to buy Planesium for himself and had left money for that purpose with a banker in Epidaurus. Curculio plans to forge a letter, seal it with the ring, pretend to be a messenger from the soldier, and convince the slave-dealer to sell Planesium to him instead of the soldier. He and the others go inside the house to make preparations.

Scenes 7-9: Lyco the banker arrives with his apprentices and complains about being broke (Song #4). Accosted by the disguised Curculio, he is suspicious but in the end falls for the fake letter and agrees to give the soldier’s money to Cappadox, who just then comes out of the temple with his nurses; as he, Lyco, and Curculio go into his house to finalize the deal, the nurses sing about their occupational woes (Song #5). Curculio, Cappadox, and Lyco emerge with Planesium. Warning the slave-dealer that he will have to return the money if the girl is ever found to be free-born, Curculio leads her away–ostensibly to the soldier but actually to Phaedromus’ house. Lyco departs; Cappadox goes back into the temple again, this time to thank the god for a profitable day.

Scenes 10-14: Therapontigonus enters with Lyco, whom he has run into and from whom he demands his money so that he can buy Planesium. Lyco leaves, insisting that the deal is already done. Cappadox exits from the temple; Therapontigonus learns from him what has happened and rightly assumes that the culprit is Curculio. Cappadox leaves to find the banker as Curculio, Phaedromus, and Planesium rush out of the house. After an animated conversation, Therapontigonus discovers that Planesium is his long-lost sister (Song #6). As he gladly betroths her to Phaedromus, Cappadox returns and is forced to pay back all the money he received for the free-born girl. The play ends on a happy note.