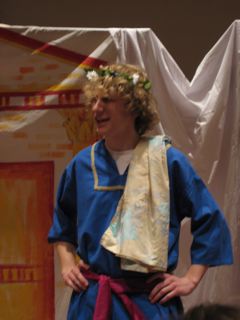 Titus Maccius Plautus (c. 254-184 B.C.) wrote over 100 comedies, of which 20 survive. All are adaptations of earlier Greek comedies. Although the characters speak in Latin, they are meant to be Greeks, not Romans, and they wear Greek clothing. The setting for the Menaechmi is Epidamnus, a Greek city on the east coast of the Adriatic Sea (now Durazzo in Albania).

Plautus’ source for the Menaechmi (“The Twins Named Menaechmus”) is unknown. The play’s clever plot, which hinges on the confusion caused by mistaken identity, was borrowed by Shakespeare for his Comedy of Errors.

All Greek and Roman drama is written in verse, some of it designed to be sung. Accompaniment would have been provided by an aulos, a double-reed instrument similar to an oboe. We turned the five lyrical sections of the Menaechmi into songs but relied on a piano, not an aulos, for accompaniment.

While we generally remained faithful to the text, we took the liberty of adding a chorus of singing lawyers and creatively altering some of the roles. Plautus’ actors would all have been male and worn masks. The play would have been performed without intermission, as we too performed it.

Prologue: The prologue-speaker, whom we called Marsuppium (“Pouch”), supplies the audience with background information on Menaechmus I, a young lawyer living in Epidamnus, and on his twin brother, Menaechmus II (originally named Sosicles). 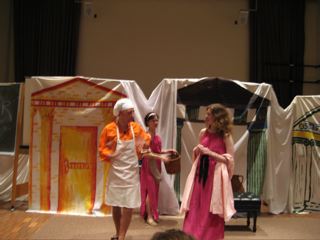 Scenes 1-2: The parasite Peniculus (“Duster”) enters, hoping to get a free meal from his patron. Men. I exits from his house, complaining about the nosiness of his wife, Matrona (Song #1). Noticing Peniculus, he shows him the dress that he has stolen from his wife to give to his girlfriend Erotium.

Scenes 3-4: At that moment Erotium comes outside; Men. I gives her the dress and orders lunch to be prepared for them. He and Peniculus depart for the forum while Erotium sends her cook (Coquus) off to the market with instructions to buy food. The photo spotlights Coquus as he confers with Erotium and her maid (Ancilla).

Scenes 5-7: Men. II and his slave Messenio, accompanied by two sailors, arrive in Epidamnus, looking for long-lost Men. I. They meet the cook returning from the market; he goes inside to inform Erotium. She appears and sings a duet with Messenio (Song #2). Messenio warns his master not to accept Erotium’s invitation to lunch, but Men. II is persuaded to do so. He entrusts his money-bag (marsuppium) to Messenio and enters Erotium’s house. Messenio takes the money-bag back to the inn where they are staying; the sailors decide to tour Epidamnus.

Scenes 8-10: Peniculus, upset at having lost Men. I in a crowd, returns and encounters Men. II exiting from Erotium’s house. Furious that lunch has been eaten without him, Peniculus runs into Men. I’s house to tattle on him by telling Matrona about the theft of her dress. Erotium’s maid asks Men. II to take a bracelet (another gift to Erotium, stolen by Men. I from his wife) to the jeweler. He departs, intending to sell both the bracelet and the dress, which Erotium has asked him to have redecorated. (See the photo of Men. II with the dress at the start of this plot summary.) 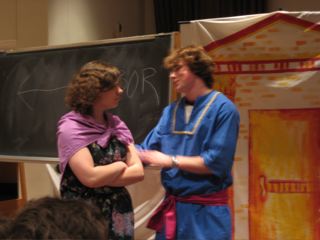 Scenes 11-13: As Peniculus and Matrona emerge from the house, Men. I comes home after a bad day in court; his fellow lawyers commiserate with him (Song #3). His wife then accuses him of theft and shuts him out of his own house. In the photo Men. I tries in vain to pacify his wife.

Peniculus, unrewarded, storms off. Men. I begs Erotium to give back the dress; she reacts by shutting him out of her house. Bewildered, Men. I leaves to consult his friends about what to do next.

Scenes 14-16: Men. II, carrying Matrona’s dress and bracelet as he looks for Messenio, encounters his twin’s irate wife; she sends her maid to fetch her father, Senex. He creeps in (Song #4) and tries to mediate between his daughter and son-in-law. Men. II feigns madness to get rid of them, then dashes off to his ship. 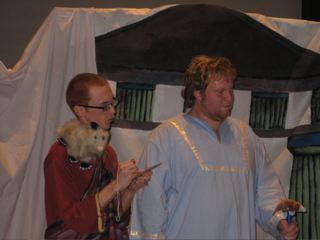 Scenes 17-20: Senex reappears with a doctor, Medicus; they meet Men. I, who is mystified by their questions. The photo shows the doctor, who in fact is a pet psychiatrist specializing in marsupials, as he and Senex observe Men. I’s odd behavior.

Concluding that Men. I is insane, they decide to have slaves tie him up and carry him to the doctor’s house. Just as Men. I is being attacked, dutiful Messenio arrives (Song #5) and rescues him. After requesting and receiving his freedom, he goes to get the money-bag from the inn. Men. I again attempts to persuade Erotium to give back the dress.

Scenes 21-22: Men. II and Messenio appear, having run into each other offstage. Seeing Men. I being kicked out of Erotium’s house, Messenio notices the resemblance between him and Men. II. After an interrogation the twins recognize each other and are happily reunited. Messenio is freed by his real master, and the brothers agree to return together to their native Syracuse in Sicily.