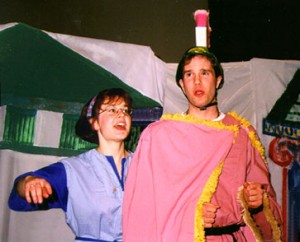 Titus Maccius Plautus (c. 254-184 B.C.) composed over 100 comedies in Latin, adapting them from Greek originals. His source for Miles Gloriosus was a Greek play, now lost, called Alazon (“The Braggart”).in Miles Gloriosus speak Latin, they are meant to be Greeks, with Greek names, clothing, and customs. The action takes place on a residential street in Ephesus, a Greek city on the coast of Asia Minor famous for its temple of Artemis (Diana).

Scenes 1-2: Pyrgopolynices (“Frequent Fighter of Fortresses”), a braggart soldier, enters, escorted by three satellites and a parasite, Artotrogus (“Bread Gobbler”), who earns his meals by flattering the soldier. He and the soldier sing about Pyrgopolynices’ extraordinary virtues (Song #1). The soldier then exits with his retinue to go shopping while the parasite hunts for food in the soldier’s house.

The crafty slave, Palaestrio (“Wrestler”), appears and explains, in a delayed prologue, how he has come to be the soldier’s slave. Formerly he served a young Athenian, Pleusicles (“Sailor Guy”), whose girlfriend, Philocomasium (“Fun at a Party”), the soldier kidnapped from Athens and took home with him. When Palaestrio tried to reach his master with this bad news, the slave was seized by pirates and sold, by chance, to the same soldier. Thus both he and the girl have been living in the soldier’s house in Ephesus. But Palaestrio has sent a letter secretly to his former master, telling him where they are. Pleusicles has now come to Ephesus and is staying with a helpful old man who lives right next door t 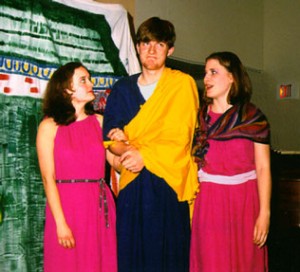 Scenes 3-7: The next-door neighbor, Periplectomenus (“Entangler”), is frantic because some unknown slave from the soldier’s house, while chasing a monkey on the roof, has observed Philocomasium and her lover kissing in Periplectomenus’ house. With Palaestrio’s help, he chastises his slaves for not having caught the man (Song #2). Then he and Palaestrio dream up a plan to fool the soldier’s slave into believing that the girl he saw kissing was actually Philocomasium’s twin sister, recently arrived from Athens with her boyfriend. At that moment the slave himself, Sceledrus (“Criminal”), conveniently turns up. Palaestrio, Philocomasium, and Periplectomenus succeed in confusing him so much that he despairs (Song #3) and runs away.

Scenes 8-9: Palaestrio enlists the aid of the next-door neighbor and Pleusicles to pull off another scheme that he has cooked up: Periplectomenus (a bachelor) will ask a lady friend of his to pretend to be his wife. Palaestrio will convince the soldier that this woman hates her elderly husband and is madly in love with the soldier, prompting him to lose interest in Philocomasium in his eagerness to seduce another man’s wife! Palaestrio will tell the soldier that Philocomasium’s mother and sister from Athens happen to be visiting Ephesus that very day and could take her home with them. Pleusicles will dress up like a ship captain and bring some sailors with him to escort her to the harbor. 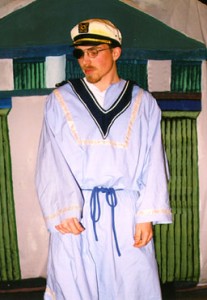 turns with his lady friend, Acroteleutium (“Tippy Top”), and her maid Milphidippa (“Funny Filly”); they go inside his house to prepare to fool the soldier. Pyrgopolynices comes back home and runs into Palaestrio, who gives him a ring, supposedly from Acroteleutium, and tells him how much the woman loves him (Song #4). Milphidippa emerges from the neighbor’s house and confirms Palaestrio’s story. The soldier rushes into his own house to tell Philocomasium that he is sending her home. As soon as he reappears, Acroteleutium and Milphidippa complete their trickery.

Scenes 17-20: Pleusicles, wearing his disguise, arrives to escort Philocomasium to the ship; she pretends to be reluctant to leave the soldier, but the sailors’ music (Song #5) hastens her departure. The soldier agrees to let her take Palaestrio with her as a consolation present. Two slave-boys invite the soldier to come into the neighbor’s house and meet Acroteleutium. He enters, only to find the old man and the cook waiting to give him the punishment he deserves.