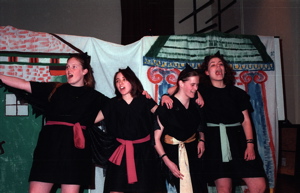 Titus Maccius Plautus (c. 254-184 B.C.) wrote over 100 comedies, of which 20 survive.  All are Latin adaptations of earlier Greek comedies.  His source for the Mostellaria, whose title literally means “Ghostly,” was probably a Greek play called the Phasma (“The Ghost”) written by Philemon (c. 360-262 B.C.).  Even though the characters speak to each other in Latin, they are meant to be Greeks, not Romans, and they wear Greek clothing, not Roman togas.  The setting of the play is Athens, Greece. The Mostellaria is written in verse, and certain sections of it are designed to be sung; we have set these and others to music.  In ancient times accompaniment would have been provided by a double-reed instrument similar to an oboe.

Scenes 1-2:  A family of bats has stowed away on a ship from Egypt to visit Athens.  After singing about the life of a bat (Song #1), they enter Theopropides’ house, causing a ruckus. Grumio, Theopropides’ country slave, rushes out, fighting with Tranio, Theopropides’ city slave; he accuses him of having corrupted their master’s son, Philolaches, a college student who has remained at home while the rest of his family sailed to Egypt for a vacation.  Unperturbed by Grumio’s rebukes, Tranio leaves to buy fish at the harbor after ordering Grumio to get rid of the bats. 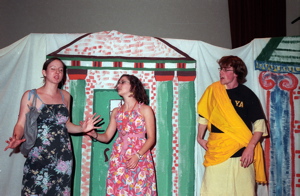 Scenes 3-4:  Tranio runs into Philolaches, who is philosophizing about how he has degenerated during his family’s absence; once an exemplary youth, he has become idle and extravagant, spending money on parties and on his girlfriend Philematium (Song #2).  As Tranio goes on his way to the harbor, Philematium arrives with Scapha, her college roommate; Philolaches eavesdrops on their conversation.  Philematium believes that the love she shares with Philolaches will last; Scapha counsels her not to be so naive.  Philolaches impatiently cuts off their conversation; he is eager for their party to begin.

Scenes 5-6:  Philolaches’ tipsy fraternity brother, Callidamates, arrives with his girlfriend Delphium; they join the party.  Suddenly Tranio races in with disturbing news:  he has observed Theopropides, his wife, and two daughters disembarking from a ship at the harbor!  Taking charge, Tranio orders all of the party-goers to hide in the house and make no noise.  Scapha is instructed to guard the door and let no one in. 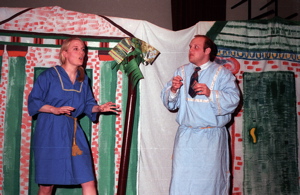 Scenes 7-8:  Travel-weary Theopropides enters with his family; the neighbor’s wife greets them (Song #3).  Tranio then invents a story about Theopropides’ house being haunted.  Frightened, the women all run into the neighbor’s house while Theopropides and Tranio go to pray to the gods. In the meantime a money-lender to whom Philolaches is in debt arrives to collect interest on the loan. Theopropides and Tranio return.  Tranio, thinking fast, tells the old man that his son has borrowed money in order to buy a new house since the old one is haunted.  Pleased with his son’s savvy, Theopropides promises to pay the creditor; he then asks Tranio where the new house is located.  Fishing for an answer, Tranio hits on the idea of saying that the house was bought from their neighbor, Simo.  Delighted, the old man decides that he would like a tour of Simo’s house, which he now thinks belongs to him. 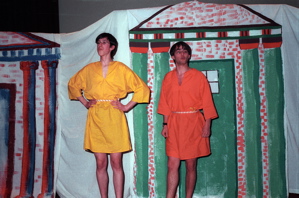 tells him that Theopropides is eager to inspect his house to get ideas for an addition to his own house.  Flattered, Simo consents, but he has business in the forum; after a brief meeting with his neighbor he leaves.  Tranio and Theopropides go inside Simo’s house to finish the tour themselves.Scenes 11-13: Phaniscus and Pinacium, Callidamates’ arrogant slaves, arrive to escort their master home from the party (Song #5).  They cannot understand why no one answers the door.  Meanwhile Theopropides and Tranio exit from Simo’s house; the old man is so happy that he pays the money-lender on the spot and sends Tranio away to find Philolaches.  Then he notices the two slaves knocking on the door of his house and questions them; not recognizing him, they divulge the truth. Simo returns from the forum, and the two old men ponder how to punish Tranio.   At this moment the party-goers emerge from the house; they easily persuade Theopropides to forgive his son, but he only reluctantly agrees to let his slave off the hook.  With harmony restored, not just in the human world but in the bat world too, the play comes to a close.