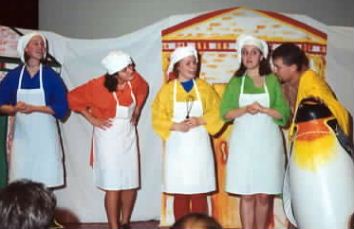 Titus Maccius Plautus (c. 254-184 B.C.) composed over 100 comedies in Latin, adapting them from Greek originals. His source for Pseudolus is unknown. We do know that the play was first performed in Rome in April, 191 B.C. during the Megalesian festival. Cicero tells us that the play was still popular in his day (1st century B.C.) with the famous actor Roscius in the role of Ballio.

A Funny Thing Happened on the Way to the Forum, the hit Broadway musical, borrows much of its plot and even the name of its leading slave, Pseudolus (“Deceitful Dude”), from Plautus’ comedy.

Although all the characters in Pseudolus speak Latin, they are meant to be Greeks, with Greek names, clothing, and customs. The action takes place on a residential street in Athens, outside the houses of Ballio, Simo, and Charinus.

Scenes 1-2: Young Calidorus explains to Pseudolus, his family’s slave, that his girlfriend Phoenicium has been sold to a Macedonian soldier by Ballio, the double-crossing leno (“pimp”) who owns her and had earlier promised to sell her to no one but Calidorus. Pseudolus reads Phoenicium’s wretched love-letter to Calidorus in Song #1. Although he has no idea how he will do it, Pseudolus promises to obtain Phoenicium for Calidorus before the day is over. Ballio suddenly emerges from his house, being even more obnoxious than usual because it is his birthday. Phoenicium and three other lovely flute-girls sing a tune (Song #2) for Ballio and help him plan his party.

Scenes 3-4: Pseudolus and Calidorus alternately beg and abuse Ballio to make him agree to hand over Phoenicium. Ballio is willing to break his agreement with the soldier if Calidorus can come up with the money (20 minae or 2000 drachmas) before the messenger from the soldier arrives to pick up the girl. As Ballio heads to the marketplace (forum) to hire some cooks for his birthday celebration, Pseudolus asks Calidorus to go look for someone who can help them. As Pseudolus ponders what to do next, Simo and his neighbor Callipho enter; Simo is grumbling about his son’s lovesick behavior. Pseudolus approaches them and warns Simo that he plans to get 20 minae from him by the end of the day. Then he tops that boast by claiming that he will also outwit Ballio and acquire Phoenicium for Calidorus. Simo unwisely bets him 20 minae that he can’t do this. Simo and Callipho leave to attend to business in the forum. 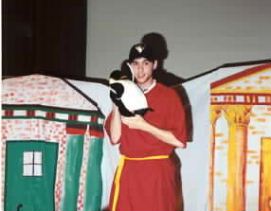 Scenes 5-6: In Song #3 Pseudolus confidently predicts the success of his plan–even though he has not yet thought it up! The soldier’s slave Harpax then appears, sent by his master to pick up the girl Phoenicium, whom the soldier has already paid for. Harpax carries a letter from the soldier, sealed with a wax likeness of the soldier, whose name is Polymachaeroplagides. Pseudolus pretends to be Ballio’s assistant and manages to steal the letter from Harpax without his noticing; he then sends him away to take a nap in an inn, promising to fetch him as soon as Ballio comes home. While Pseudolus is rejoicing on stage, Calidorus returns with two helpers: his friend Charinus and Charinus’ slave Simia. They decide that, instead of trying to find 20 minae to buy Phoenicium, Simia should dress up like Harpax and use the stolen letter to fool Ballio into giving Phoenicium away to the wrong messenger. They all go inside Charinus’ house to fashion a costume for Simia.

Scenes 7-8: Ballio returns from the forum (where he has run into Simo and Callipho and been warned about Pseudolus) with four arrogant cooks (Song #4). As they and Ballio disappear into his house, Simia, now disguised as Harpax, emerges from Charinus’ house, with Pseudolus and Charinus still offering advice. As they watch from afar, Simia accosts Ballio and is so convincing as Harpax that Ballio hands over Phoenicium gladly, thinking that he has thwarted Pseudolus. Simia takes Phoenicium to Charinus’ house; Pseudolus and Charinus join them there to celebrate.

Scenes 9-10: As Ballio is gloating, Simo and Callipho arrive. Then the real Harpax shows up, singing about his dutifulness (Song #5). Believing him to be an impostor sent by Pseudolus, the old men and Ballio make fun of him until they realize that it is they who have been fooled. Harpax then forces Ballio to return the soldier’s money, and Simo agrees to pay Pseudolus the 20 minae he had wagered.