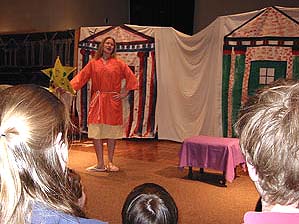 The ancient Roman dramatist Titus Maccius Plautus(254-184 B.C.) wrote over 100 comedies in Latin, adapting them from Greek originals. His source for Rudens (“The Rope”) was a comedy of uncertain title by Diphilos (4th century B.C.)

Although the characters in the play speak Latin, they are all meant to be Greeks, with Greek names, clothing, and customs. The action takes place on the coast of North Africa (modern-day Libya) near Cyrene, a Greek city famous for its wealth and culture.

Plautus composed his plays entirely in verse, with some sections designed to be sung. We have set these and other sections to music; the tunes roughly reflect the meters of the original Latin.

In Plautus’ day musical accompaniment would have been provided by an instrument called an aulos, similar to an oboe. Only male actors were used, and they all probably wore masks.

Prologue: The star Arcturus descends from the sky to supply the audience with the necessary background information. Arcturus is responsible for the storm that has damaged Daemones’ roof and wrecked the ship carrying the slave-dealer Labrax, his friend Charmides, and two slave-girls, Palaestra and Ampelisca, to Sicily. 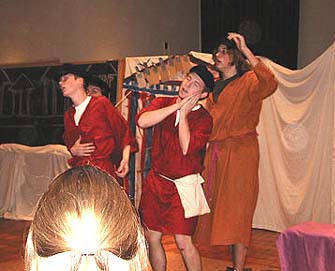 Scenes 1 & 2: Daemones, his wife Daedalis, and their slave Sceparnio are about to repair the storm damage when Plesidippus rushes in, searching for Labrax, who was supposed to meet him for lunch at the shrine of Venus next to Daemones’ house. Catching sight of Labrax and Charmides struggling to shore, Plesidippus dashes off to try to catch them, leaving Sceparnio to describe how Palaestra and Ampelisca arrive safely but separately on the beach.

Scenes 3-7: After Daemones, Daedalis, and Sceparnio go inside, Palaestra and Ampelisca enter, each bemoaning her sad fate (Song #1). The two girls discover each other and seek shelter from Ptolemocratia, the poor priestess of Venus’ shrine. Four fishermen appear and sing about the hardships they must endure every day (Song #2); they are questioned by Trachalio, Plesidippus’ dutiful slave, who cannot find his master anywhere.

Scenes 8-12: Ampelisca, sent by the priestess to fetch water, meets Trachalio and 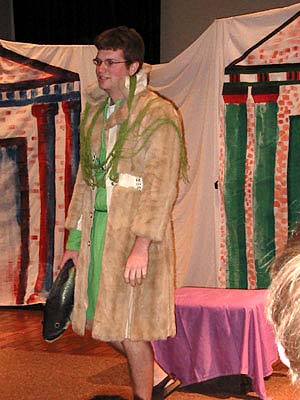 tells him about the shipwreck; he runs into the temple to console Palaestra. When Ampelisca knocks at Daemones’ door, Sceparnio answers and falls in love with her. While he goes to get water for her, she sees Labrax and flees into the shrine. Sceparnio, finding her gone, enters the shrine to return the urn. Meanwhile Labrax and Charmides stagger in, blaming each other for the shipwreck. When Sceparnio emerges from the temple, he accidentally reveals the girls’ hiding-place. Labrax charges into the shrine to recover his lost “property”; Charmides, exhausted, drags himself into the temple to take a nap.

Scenes 13-18: As Daemones leaves his house, Trachalio bursts from the shrine and begs him to help save the girls from Labrax. With his hired thugs, Turbalio and Sparax, Daemones races to the rescue. Palaestra and Ampelisca flutter out; Trachalio has them sit on the altar and pray tp Vemus for aid (Song #3). Labrax is pulled from the shrine and reproached. While Trachalio goes to find Plesidippus, Daemones and the thugs guard Labrax. When Plesidippus arrives, he hauls Labrax off to court, leaving the girls in Daemones’ care. Charmides follows Plesidippus to testify against Labrax. 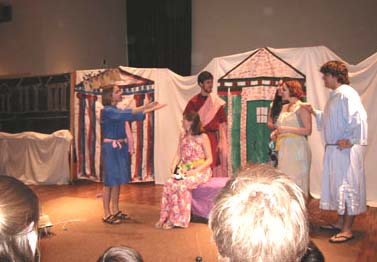 Scenes 19-24: Daemones ducks inside to avoid encountering his neighbor Gripus, a hippie beachcomber who has fished a mysterious box out of the sea. As he is rejoicing over this find (Song #4), he runs into Trachalio, who claims that the box belongs to Labrax and contains tokens (in our version stuffed animals) that can help Palaestra identify her Athenian parents. To settle their dispute, Daemones is asked to arbitrate. He and Daedalis discover that Palaestra is their own daughter, kidnapped by pirates at the age of three. While Trachalio goes to find Plesidippus, Daemones and his wife sing about their good luck (Song #5).

Scenes 25-29: Gripus, feeling left out, is given a token reward. Plesidippus returns with Trachalio and gets Daemones’ permission to marry Palaestra. Sceparnio also gets permission to marry Ampelisca. Labrax, accompanied by Charmides, trudges back on stage, having lost his case in court and all his luggage in the ocean. By this time the only thing that can make everyone happy is an invitation to lunch. With that, and a final song by the whole cast, the play ends.