Read more about why our students decided to pursue their studies in Norwegian and Nordic Studies.

My family is Norwegian American, and so I’ve always been interested in Norwegian culture. In high school, I decided to start teaching myself Norwegian, and this journey led me to discovering St. Olaf College. I didn’t plan on majoring in Norwegian when I arrived on campus, but I quickly realized that speaking Norwegian and being surrounded by others who love Norway as much as I do was my one of my favorite parts of being on campus. 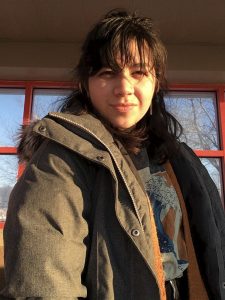 I decided to add a concentration in Nordic Studies because of my long-standing love for the Nordic states, and I’ve been visiting Finland since I was 12 years old. When I first came here, I hadn’t realized I could add that academic focus to my studies, but when it came up in Norwegian 111, I couldn’t say no! 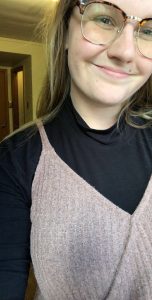 Norwegian and Political Science Major with a concentration in Nordic Studies.

During my junior year of high school I studied abroad in Norway. My study abroad experience is a huge reason I ended up at St.Olaf. Knowing I could continue my language skills was important to me and I haven’t stopped wanting to learn more. 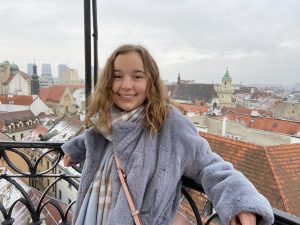 I chose to be a Norwegian major because I loved learning Spanish in middle school and high school and wanted to learn a new language when I came to St. Olaf. My grandmother was from Norway, so I learned a little bit Norwegian from her when I was younger and wanted to learn more. I’m also excited to study abroad in Norway and be able to speak Norwegian with my cousins who live there! 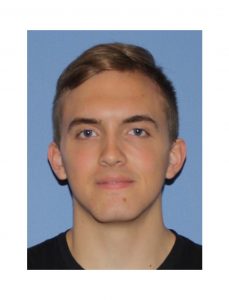 A Nordic Studies concentration allows me to reconnect with my heritage at the best place to do it (besides the actual countries, which I’ll be able to study in thanks to the department). I’m able to obtain a much deeper understanding into a culture which is much more complex than meets the eye. 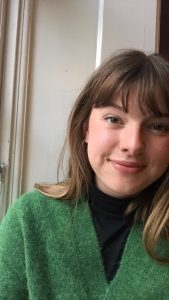 I chose Nordic Studies after taking Norwegian 111 and discovering my passion for Norwegian language, history, and culture. The interdisciplinary classes offered by the department made it easy to integrate a concentration into my studies at St. Olaf, and greatly enriched my academic experience here. 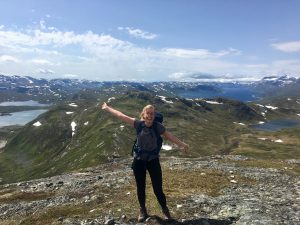 I initially took Norwegian for the FOL and to be able to connect with my heritage and relatives in Norway. However, I really enjoyed the professors, classmates, course content and study abroad opportunities, so I ended up taking more courses beyond the requirement and am now majoring and concentrating! 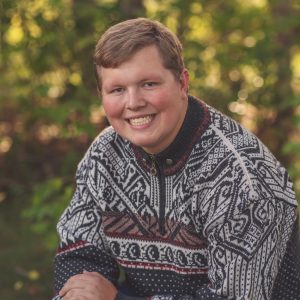 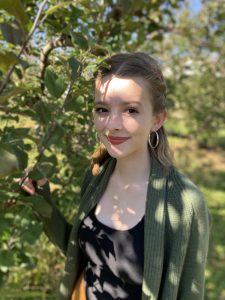 After living in Stavanger, Norway for four years, and having worked at Skogfjorden (Concordia’s Norwegian Language Village) for two summers, it was only natural for me to major in Norwegian. I can connect to the place I partially grew up in, communicate with my Norwegian relatives, and pass on my passion for the language to children who care about Norwegian as much as me. Norway will always be a part of me and I am so happy to be able to continue my study of its language at St. Olaf. 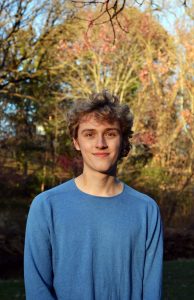 I decided to be a Norwegian Major because I found myself very interested in Norwegian culture and especially Norwegian literature. I also remember one time when I was little we went to the Swedish institute with my grandparents and we stopped at a Swedish flag making station and my grandfather helped me make one. When I finished, all the old ladies were laughing because he had tricked me into making a Norwegian flag instead. So it’s also for my grandfather as well.

Inspired by Adorno’s Minima Moralia, in which he states that “history does not merely touch on language, but takes place in it,” I have come to be shaped into a language acquisition process, one that includes Norwegian. 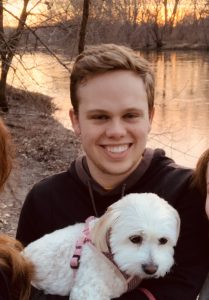 Learning Norwegian has reignited my love for languages again. I took Spanish in high school, but I fell in love with Nordic culture, history, and language. St Olaf and the Norwegian department has given me so many opportunities for interdisciplinary study and I can’t wait to keep learning Norwegian.

I initially took Norwegian because I wanted to try something new. I was tired of spanish and I thought that it would be great to embrace St. Olafs history by learning Norwegian and about Norway. Being able to access another part of the world via language is amazing and is something that I will be able to use my entire life. The study abroad options that become available by learning Norwegian are also a huge bonus. 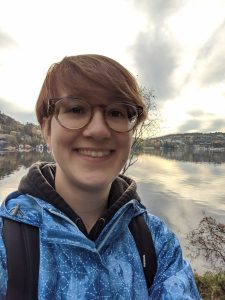 I chose Norwegian for my FOL on a whim, and I ended up falling in love with the language. I have since studied abroad in Norway for a total of 6 months through the International Summer School and HECUA: The New Norway program, and I ended up falling in love with Norway, too. I kind of stumbled into a Nordic Studies concentration because of studying abroad and the easily interdisciplinary aspect of the concentration, but it has been an important subject in both my academic and personal development throughout my college career. 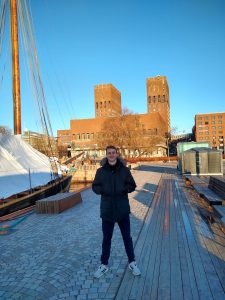 I lived in Oslo for three years when I was younger and my extended family comes from Norway. I also want to study and/or work in Norway sometime in the future. Therefore, I have decided to pursue a Norwegian major in addition to my Political Science degree in the hopes that I might sometime use my languages in an international career.

Last summer, I traveled to Norway with my family and had an amazing experience exploring Oslo and spending time in the arctic circle with my relatives. I am studying abroad this summer at the Oslo Summer School, participating in the Peace Scholars Seminar and learning about Norway’s role in peace mediation. 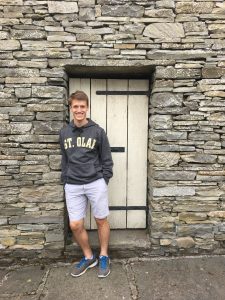 I chose Norwegian as my FOL because I thought it would be fun to learn about my Norwegian heritage, and I ended up really enjoying the structure and content of the class.

I developed a great interest in Norway’s culture, and the idea of pursuing a second language really excited me. I also hope to take advantage of the great study abroad options available.

I enrolled in Norwegian 111 on a whim. I became deeply invested in the culture of Norway and the processes of learning the language. I was already intending on majoring in Environmental Studies, and began to notice Norway’s progressiveness in environmental sustainability. I decided to add on a Nordic Studies Concentration in order to focus more closely on the Nordic region and culture in relation to the environment and to continue learning the language. 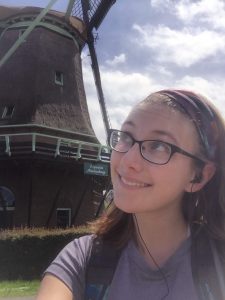 I was rummaging around in my basement one day when I found an old Norwegian book. I thought the language looked cool, so I started learning it. My father used to work in Norway and my whole family is from Scandinavia. I would like to move there someday. 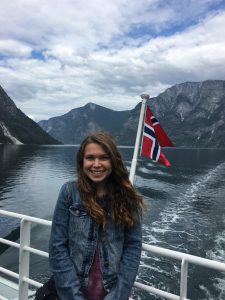 Initially interested in taking Norwegian to be able to speak to relatives and wanting to learn another language. After taking more classes in the department after completing the FOL, it made sense to pick up the concentration. I am also going to the Oslo Summer School this summer, so the department provided me a bunch of cool opportunities. 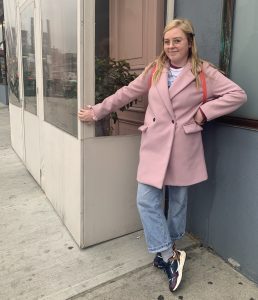 I fell in love with Norwegian by accident. It was the only language course available so I signed up and discovered how fun it was in a matter of weeks. I slowly began to realize that I wanted to continue studying Norwegian long after the language requirement and so I declared it as my major. Since then my excitement for it has only grown. Norwegian is also great for anyone hoping to communicate with a loved one who speaks Swedish or Danish. I personally have no Norwegian heritage, but I can remember the first time I was able to speak in Norwegian to my Swedish grandmother and have a full conversation with her. It was such an exciting moment and really solidified the love I have for the language. 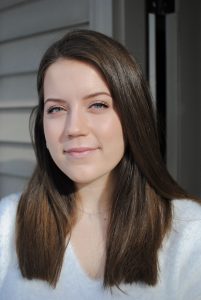 I chose to concentrate in Nordic Studies because I have relatives in Norway and I wanted to learn more about the culture and language. This past summer I traveled to Norway with the St. Olaf Choir and I was able to use my Norwegian to speak with my relatives before the concert! I’ve also enjoyed the interdisciplinary nature of the concentration and being able to take classes outside of the Norwegian department, but still on the subject of Norway and Scandinavia.

When I was in high school, my dad told me to marry a Norwegian man who owned a walk-in freezer. However, this comment did not impact my decision to study. Rather, I like the community in my Norwegian classes, and in the process I’ve learned that Nordic studies really compliments my English major, especially my interest in historical texts. 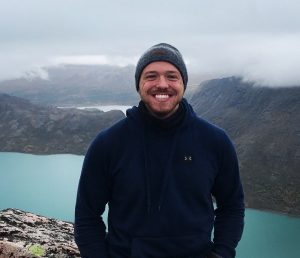 I was initially interested in Norwegian because I have relatives in Norway, but the main reason I decided to major in Norwegian was the faculty, the GEs provided, and my experience studying abroad in Oslo.

I wanted to be able to talk like the Swedish chef. 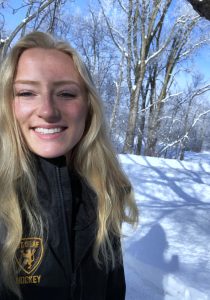 I chose to follow the Nordic Studies concentration track because I love learning about everything to do with Scandinavia. It is a big part of my heritage and the ability to explore the culture, language and nature is something I cherish.

After taking an introductory history course at St. Olaf, I became deeply interested in the study of norse folklore and symbolism. The Nordic Studies concentration is a wonderful way to reconnect with my roots and learn the language, history and culture of my ancestors. 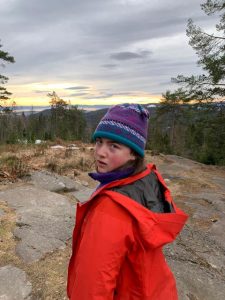 I started Norwegian at St. Olaf because I didn’t want to learn Spanish anymore. Learning Norwegian seemed like a very unique opportunity to learn more about my heritage, but once I started classes I fell in love with everything: the language, the culture, the professors, and the other students. I just kept taking classes after the FOL requirement because I liked it so much. I decided to study abroad in Bø i Telemark to practice my language, learn more culture, and actually live in the place I have studied so much about.

My mother is from Norway, and I grew up speaking some Norwegian at home, so my first Norwegian class was really just a way for me to brush up on my language skills. However, I quickly fell in love with this fascinating country after spending a summer in Oslo through the International Summer School in 2017, and I felt inspired to take more classes from the Norwegian department and learn more about Norway. 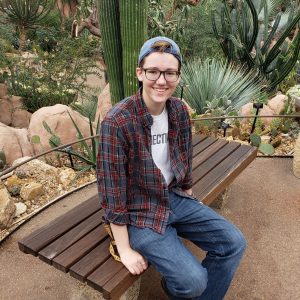 My grandmother comes from Denmark, and I’m excited to be able to communicate with her in what is close to her native language. Norwegian is my favorite subject, and I look forward to further exploring the language and culture in my four years here! Just kidding, I’m only pursuing this so I can eat more brunost. 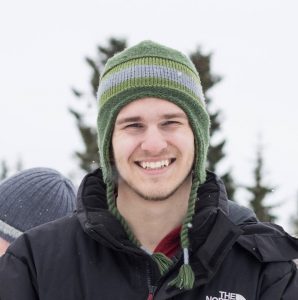 I’ve always been interested and connected to Norway, and the Norwegian department gave me a way to get a lot better at Norwegian, learn a lot more about Norway, and even go there for the International Summer School in 2018.