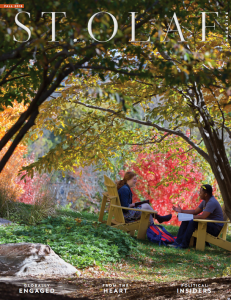 St. Olaf Magazine earned eight “Excellence Awards” at the 20th annual Minnesota Magazine & Publishing Association Excellence Awards gala. In the Education category, the magazine was recognized with Gold awards in feature writing and feature design for “La Géographie Musicale de Paris 1924” (The Musical Geography of Paris 1924) by Joel Hoekstra, Silver for “The Power of Story” by Jan Hill, and Bronze for Overall Excellence, Overall Design, Spread Design (“Vintage Cuba”), Regular Column (“Almanac”), and Cover Design. And, for the second time, St. Olaf Magazine was named a semi-finalist for the MMPA 2016 Magazine of the Year award.

Talking to movers and shakers in Washington D.C. is something C-SPAN’s on-air host Peter Slen ’85 does almost daily. At C-SPAN, everyone has a chance to voice their opinions and to question politicians and policymakers directly, says Slen. It’s a vital premise in today’s media mix of cable television, traditional and social media, and more.

Vortex, the St. Olaf Woman’s ultimate team of which Tulsa Douglas ’18 is captain, is one of five college ultimate teams in the United States to receive national attention.

Anna Palmer ’04 has always been ready and willing to go wherever the story is. Among the most tenacious and successful reporters for Politico, covering Capitol Hill and the historic 2016 election, she just landed one of the most prestigious positions in political journalism today as one of two writers for Politico’s daily newsletter, Playbook.

A pastor’s first job is to “take care of our people,” says Thomas Rusert ’06. Sometimes, he has learned, “our people” are those we have never met.

Spotlight: Magnum Chorum: We Sing with Joy in our Hearts, By Kim Bowman ’88

Almanac looks back at the tumultuous spring of 1970.