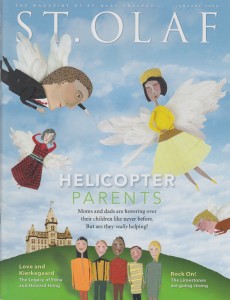 The parents of today’s students are intimately involved in their children’s college career: from the choice of college to decision-making about courses, majors, and extracurricular activities. Are they hovering or helping?

Love and Kierkegaard
By Marc Hequet

For nearly 70 years, Howard ’34 and Edna Hatlestad Hong ’38 have influenced generations of Oles with their passion for Danish philosopher Soren Kirekegaard, with their deep faith and humor, and with their devotion to each other.

The Great Books
By Marc Hequet

The Howard V. and Edna H. Hong Kierkegaard Library is a world-class resource for Kierkegaard scholars.

Rock On!
By Patricia Grotts Kelly ’77

Celebrating 16 years of good music, good times, and good friends, the Limestones are still going strong – and giving back.

All the world’s a stage for Music Professor Janis Hardy.