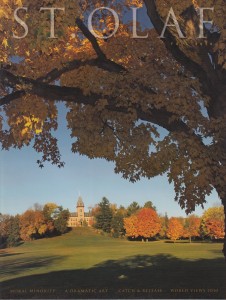 Chris Lomen ’10 is rollerblading 4,000 miles in an effort to raise money to rebuild schools in Haiti.

From Farm to Fork
By Carole Leigh Engblom

While food may be an abstract idea to urban consumers, making it real is a priority for the students who work at STOGROW.

Although the St. Olaf Honor Code as been in effect for 100 years, the issues of honor, ethics, and moral responsibility have been at the core of the college’s mission since its founding in 1874.

A Dramatic Art
By Suzy Frisch

With its rich history and grounding in the liberal arts, St. Olaf theater majors carry the college’s message of creative excellence around the nation and through performances and artistic expression.